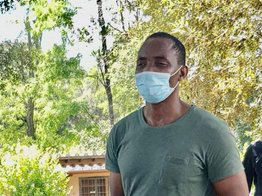 A brief overview of the Hunger and Thirst strike of Abdoubakar Soumahoro on  June 16-18 in Rome and an important victory for the undocumented agricultural workers of the USB trade union.

On June 16, Aboubakar Soumahoro, a member of the USB (Unione Sindicali di Base) declares a hunger and thirst strike in support of the USB workers – demanding fundamental change in the agricultural work and the immigration policy of the Italian government.

The hunger and thirst strike is ended after a delegation of the workers have held a meeting with the Italian President Conte,  to present their demands.

“We have just left the meeting with the President of the Council @GiuseppeConteIT, where we presented our proposals. I thank you all for your support and solidarity. We continue to fight for our community. #nonsonoinvisible”

Aboubakar Soumahoro, a leader of the USB trade union of undocumented workers, who had gone on hunger and thirst strike at the Villa Pamphili where the government was meeting demanded: Government, Listen to us – We cannot breathe!! (echoing the George Floyd and the Black lives matter movement.

With chains on his hands, as the newspaper La Republica reported – Abdoubakar Soumakoro was received by Prime Minister Conte in the presence of ministers Gualtieri and Catalfo. He p!!resented the workers demands which included “regularization for health emergency of all irregular migrants on Italian territory, new migration policies, cancellation of the security decrees and agreements with Libya, reform of the agricultural supply chain that …favours the corporations”.

“Concrete acts are needed”, his statement said – “the invisible (undocumented) will be visible, not with words but with deeds.”

We will be alert on how the Italian government implements on the 3 specific demands:

Here, the links to the LVC/Europe Solidarity Statements

Some reports from Italian newspapers